So one of the greatest aspects of living in San Sebastian is that I have access to so much amazing food. I am surprised I haven’t started this earlier, but I have decided to start writing about random pintxos that I have eaten throughout my trip. My Pintxo Roundups are great because it makes me able to share the great (and bad!) food I have devoured. Also, it’ll be a great filler between my blog posts! So here we go with my first official Pintxo Roundup. 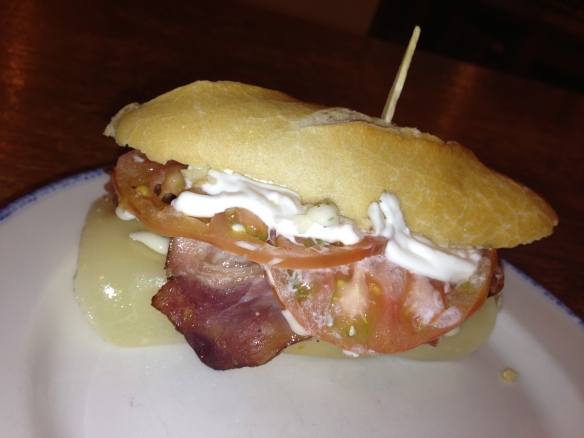 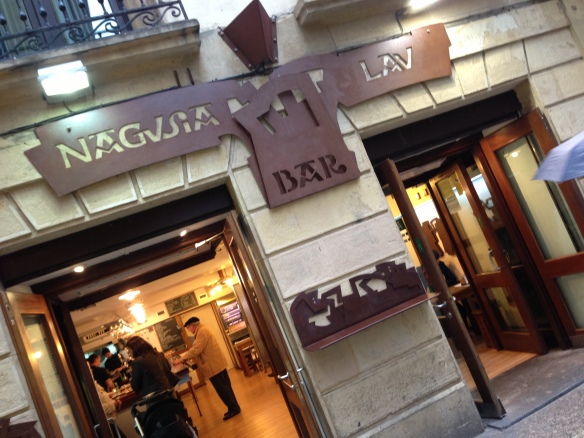 So I got to admit, this isn’t the greatest of pintxo bars in Donostia that I have been too. It has a nice variety of pintxos with adequate quality of ingredients. I chose to feature this as my first Pintxo Roundup because it was one of the closest bites of food that reminds me of something I’d get in America.

I’m pretty sure it actually isn’t called Bocadillo con todo, which translates to sandwich with everything,  because it literally had everything that a sandwich should have. Not a puny little sandwich with a slap of cured meat, which i actually find quite delicious. I grabbed this bocadillo on the go on my way back to work because my stomach was growling and it was the most substantial looking thing on the bar. And at only 2 euros, you can’t go wrong! It consisted of a nice slab of ham, bacon, sliced tomatoes, cheese, and slathered in alioli. It was actually rather enjoyable and melded really well together, especially with the garlicky mayonnaise to bind all the flavors together. The bread wasn’t half as bad either.

I apologize now to all of the people who had to watch me mow down on this messy sandwich as I was rushing back to work. Atleast you all got to see me thoroughly enjoy this monster of a bocadillo!